Baseball fans aren't coming out to the ballpark this season like they have in the past. As of May 29th, Major League Baseball’s attendance had shown a 2.9% decline in attendance when compared to the same point in 20121. Baseball executives are quick to point out a number of “excuses” like weather, TV, ticket prices, and the Marlins (who account for 40 percent of the decline in tickets sold).  Regardless, it’s their job to fill the stadium. Where do they turn for a spike in attendance and new business? The answer is custom bobbleheads.

The Wall Street Journal recently published an article on the “power of a free bobblehead.” In it, the author notes an increase in attendance of almost 50% for the Seattle Mariners when they held Ken Griffey Jr. bobblehead night2. According to studies, attendance associated with the usage of promotions has shown an average of a 14% increase3. The greatest attendance increases have recently been attributed to the resurgence of bobblehead dolls. Even last place teams like the Minnesota Twins have successfully taken advantage of bobblehead promotions this season. They've seen attendance boost by an average of 7,000 people on bobblehead giveaway days4.

What does this mean for your company? New business results from being creative and fun, not dull and boring. I’ll use tradeshows as an example. Some companies are creative with corporate giveaways but many use the same uninspiring pen and plastic cup routine. Now, imagine the buzz your booth will create with custom bobbleheads based on the company’s mascot, logo, or product. Everybody loves bobbleheads. Your booth may even experience a 50% attendance increase, much like the Mariners. In this scenario, a raffle approach will produce plenty of lead cards for your sales team. 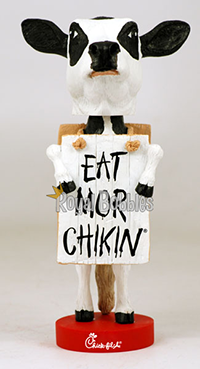 Bobblehead winners can show off their prize to co-workers in the office. They’ll proudly display it on the desk or shelf for everyone to see. In addition to its entertainment value, the branded bobblehead serves as a constant reminder of your company’s products and services. This desktop billboard gives you a clear-cut advantage over the competition when it comes time for a purchasing decision.

Are you ready to bring in new business? Visit CustomBobbleheads.com to seal the deal!