The Los Angeles Dodgers are hitting homeruns left and right with their bobblehead promotions. Last week everyone was talking about the RickMonday ‘flag saving’ bobblehead giveaway. This week, the club has announced a new promotion associated with Magic Johnson Bobblehead Night coming up on September 12th against the Giants. They’re calling it the “#MeetMagic Scavenger Hunt.”

Here are the details for the contest from the Dodgers website:

Want to meet sports legend, and Dodgers owner, Magic Johnson? Here's your chance! Each day at 2 pm, @Dodgers will release clues on Twitter about the location of hidden Magic Johnson Bobbleheads across Southern California. Be the first to arrive at the spot and correctly answer a trivia question, and you could win two suite tickets to the game and a meet and greet with Magic Johnson. 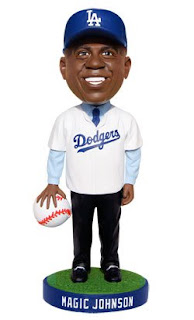 This promotional contest is a win on so many levels. First, it plays off the skyrocketing popularity of bobblehead giveaways. Second, it does a great job of engaging fans through social media by releasing clues on Twitter. Finally, the Dodgers are spreading the wealth locally. By hiding an autographed Magic Johnson at seven different southern California locales over a seven day period, they’re getting community establishments involved and stimulating the local economy. This isn’t just a Dodgers promotion; it’s now a community promotion. It’s a smart, benevolent move by the organization.

Companies should take advantage of this marketing blueprint that emphasizes custom bobbleheads, social media promotion, and community outreach. Whether you’re part of a global corporation or small business, two primary marketing goals are audience growth and engagement. The Dodgers bobblehead promotion accomplishes both of those objectives in a fun and entertaining way. Be creative and think outside the box. The “Bobblehead Hunt” concept works well for local promotions, in-store contests, tradeshows, company retreats, and more. 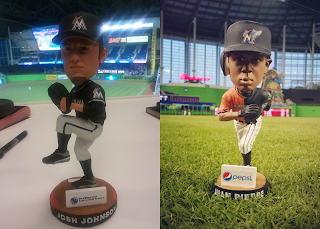 The Marlins have corporate sponsors for bobblehead giveaways,
including Pepsi and Preferred Care Partners as shown here.

If this is the case, consider sponsoring a bobblehead for local teams or famous personalities. For example, Keck Medical Center of USC is sponsoring Magic Johnson Bobblehead Night. It's practically the equivalent of a celebrity endorsement. Corporate-sponsored custom bobbleheads represent an excellent branding opportunity. Theses figures, including your company’s logo and message, will end up on the bookshelves, mantles, and office desks of decision makers. Think of it as free promotion for your products or services on prime advertising real estate.


Improve marketing results, grow your audience, and engage consumers by visiting CustomBobbleheads.com.
Posted by Unknown at 9:09 AM